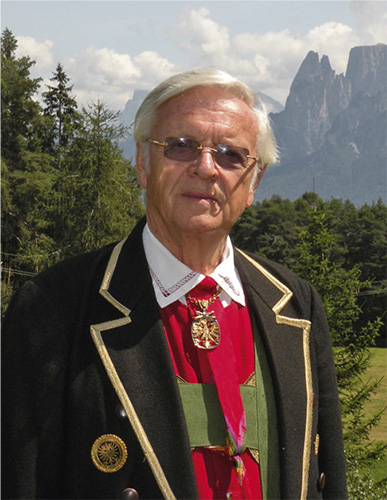 The late 1950s and the 1960s in South Tyrol have etched themselves into the memories of those who lived through them, due to the many attempts to demand from the Italian state the right of self-determination for the German-speaking and Rhaeto-Romance-speaking inhabitants of South Tyrol.

As early as November 17, 1957, there was an impressive plebiscite rally at the Sigmundskron Castle which 35,000 South Tyrolese attended. At this rally, Dr. Silvius Magnago, the charismatic head of the South Tyrolean People’s Party (SVP) and later provincial governor, called, in the name of the inhabitants of South Tyrol, upon the government in Rome to cease and desist from the constant violation of the Parisian South Tyrol Treaty of 1946, from the forced immigration of people from southern Italy, and from the many cases of provocative repression and oppression which the citizens of South Tyrol had had to endure.

Even after this peaceful and constructive demonstration – which had found acclaim throughout Europe – and the following negotiations between Austria and Italy towards
reducing tensions, the Roman government showed no willingness to modify its stance.

Subsequently, the “Liberation Committee of South Tyrol” (BAS = “Befreiungsausschuss Südtirol”) undertook specific actions to draw attention to the unendurable situation. These activities were based on a “strategy of pin pricks” (Sepp Kerschbaumer). The method of choice was the carrying-out of attacks against state-owned property and against physical symbols of the former Fascist state.

These actions culminated in a series of attacks carried out in the “Heart of Jesus Night” (also known as the “Night of Flames”) in 1961, as well as in individual attacks in subsequent years. These activities attracted worldwide attention, but also elicited an excessive reaction of the State, which responded with the persecution of the activists, including brutal torture and lengthy incarceration.

Additionally, the freedom fighters and with them all sympathetic Tyrolese were humiliated by the fact that the unscrupulous persons guilty of these acts of torture were not only acquitted by the court in Trient, but only three days later in Rome were celebrated, given citations, and promoted.

Thus, the activists of the 1960s did not achieve their goal of acquiring self-determination for South Tyrol and therefore reunifying Tyrol. But their actions motivated the U.N. General Assembly to again take up the issue of South Tyrol.

The interrupted negotiations between Austria and Italy for an upgrading of the existent autonomy of South Tyrol were resumed. The government in Rome convened the so-called “Commission of 19.” This commission was tasked with working out concrete measures for the enhanced autonomy of South Tyrol. This “package” finally came into effect in 1972 in the form of the “New Autonomy Statute.”

Those who have experienced up close the difficult and sometimes turbulent times documented in this exhibition have no doubt as to the fact that the courageous actions of and great sacrifices made by the activists of the 1960s yielded a decisive contribution to the achievement of a new and incomparably better autonomy for South Tyrol. However, the degree of self-determination necessary for our land to reunify with the Austrian state of Tyrol and the country of Austria remained out of reach.

This small exhibition titled “BAS – Sacrifices for Freedom” commemorates the dedication and suffering of the South Tyrolean freedom fighters of the 1960s and of their families.

The items exhibited here were collected by the freedom fighter Sepp Mitterhofer for the “Südtiroler Heimatbund”. Some of them are on loan from private individuals as well as from the “Ferdinandeum” Provincial Museum of Tyrol in Innsbruck. The “Südtiroler Heimatbund” with its chairman Roland Lang and honorary chairman Sepp Mitterhofer were the driving forces behind this. The military historian Colonel Dr. Hubert Speckner wrote the texts. Together with his wife, Mrs. Sylvia Speckner, he acted as curator for the exhibition and established it with the assistance of the DP-art company (Brixen). The graphics were designed by Effekt! GmbH (Neumarkt).

Here we would also like to express our appreciation to Dr. Dieter Waldthaler, in charge of the exhibition rooms, who was himself an eyewitness of the era of the 1960s!